‘Once you go Persian there’s no other version!’: Britney Spears and Iranian-born husband Sam Asghari feature on cover of Tehran Weekly with cheeky headline after tying the knot

By SARAH SOTOODEH FOR DAILYMAIL.COM

And the newlyweds were featured on the cover of the Persian magazine – Tehran Weekly Magazine – in the outlet’s latest issue.

The cover featured a cheeky headline – ‘Once you go Persian There’s No Other Version’ – which is a nod to Sam’s Persian background. 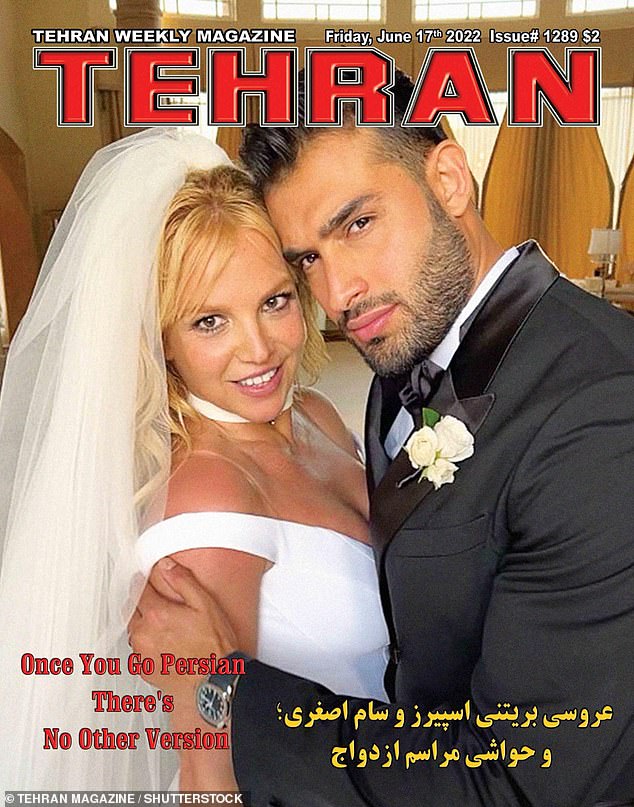 Cheeky: Britney Spears tied the knot with Iranian-born model/actor Sam Asghari earlier this month at her Thousand Oaks, California home. And the newlyweds were featured on the cover of the Persian magazine – Tehran Weekly Magazine – in the outlet’s latest issue

The image on the cover was of Britney, 40, and Sam, 28, from her Instagram stories she shared following her wedding.

Sam was born March 4, 1994 in Tehran, Iran; His father Mike had moved to LA when Sam was only two to work as a tow truck driver in LA, according to Men’s Health.

Tehran International Weekly Magazine is the leading Persian-Language weekly magazine in the United States and around the world.

Mr. Shahbod Noori is the Executive Director of our publishing company. In 1989 he published the first twenty-four page Original Bazaar Weekly.

The Original Bazaar Weekly was the first free classified and a display advertising paper, published for the Iranian community in southern California.

After eight years,The Original Bazaar Weekly was the most popular free classified advertising paper among Iranians residing in southern California. However, this great success was just the beginning.

In 2000, Shahbod Noori, for the first time in the Iranian community, released 100 pages of Tehran Weekly Magazine online at www.tehranmagazine.com. The on-line version of the magazine is free for people to read or print in PDF format, and is updated weekly on Tuesdays.

In 2022, after 26 years, Tehran International Weekly Magazine has become one of the most popular and powerful Iranian magazines in the United States and around the world. Although it mainly focuses on California, the magazine covers the United States, Canada, Europe, Asia, Australia and Middle East, as well.

There are currently more than 1 million, Armenian Iranian, Jewish Iranian, Armenian Iranian, Afghan, Tajikistan, Uzbekistan, and (other whom speak Farsi) people living in California, and 2 million more in other states of the US. Needless to say, this community is a huge market with lots of potential. Tehran is an independent weekly magazine in Farsi, published and distributed primarily in California , but also in other States. With its 26 year history of regular publication and its diverse contents for various age groups, Tehran is honored to be the Farsi-language magazine of choice among Iranian- Americans. It has a significant number of readers per issue, and every week a subscription copy’s is sent to more than 30,000, Markets, Pharmacy, subscribers, clinics, law offices, hair salons and doctor offices throughout the United States.

The magazine also goes on-line at www.tehranmagazine.com the on-line version of the magazine is FREE and updated weekly. We believe that you can take advantage of this powerful media to promote your company name, services and products among the large local, national and international Iranian community in a cost-effective way. We are currently offering special deals for placing your advertisement in Tehran Weekly Magazine. Tehran contains almost 84 pages and its published using single (or 4) colors news print, except for the four front and back glossy 4 color covers and corresponding inner pages.

— Pechanga nominated in 2 national Best Of awards — The polls are now open, and Pechanga Resort Casino is in the running again for two prestigious national titles. The Temecula, California area casino/resort was [….]